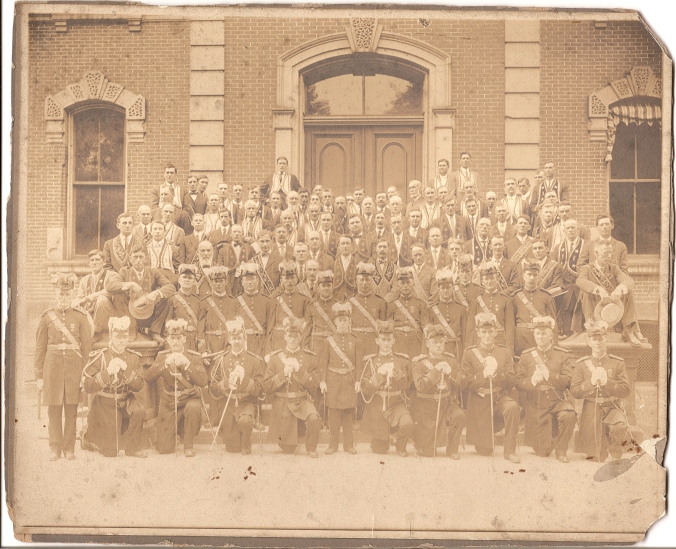 Help, I need somebody,

Help, not just anybody,

Help, you know I need someone, help!

Found among my grandmother’s treasures, this photograph presented a family mystery. Where is this taken? What oaths bound these men together?   Who is “2nd row, 3rd from right?”

The Odd Fellows Lodge leapt off the screen, grabbed me by the neck and dragged me to the box of Kerma treasures.  The photo is mounted on a hard cardboard, with no identification other than those words of inscription.  Directed to that man in the second row–third from the right–I compared his face to that of Kerma’s brother, Carlos Bradford. 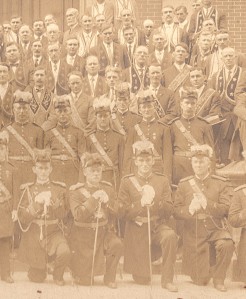 The resemblance is striking!

Square face. Cleft in chin. This guy is a Bradford.

The words Odd Fellow Lodge became google keywords over the course of the next couple of days.  Armed with the research I went back to the photo and found identification staring me in the face. 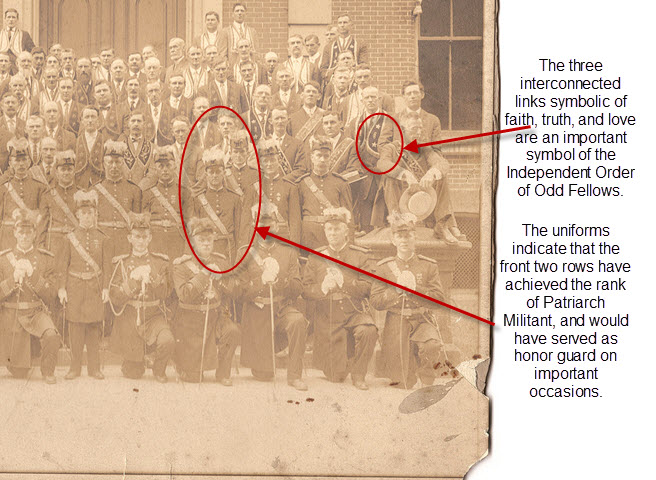 I believe I have an image of my grandmother Kerma’s grandfather Amzi Bradford!!!

I Need Somebody! Not just anybody!

My detective work continues to turn this hunch into a solid, positive identification.  The hats, mustaches, suits and shoes of these men offer clues as to the date this gathering took place.  The building’s windows and door moldings may hold clues as to where the photograph was shot.  If I could confirm either of those facts, then I could–with much greater certainty– state that I do, indeed, have an image of my great-great-grandfather Bradford.  This is where I need help, and not just from anybody!  Photo detectives: can you shed some light on these lingering questions?  Do you have sources you could recommend for a novice photograph historian?  Leave your ideas in the comments–I look forward to hearing from you!

One thought on “HELP! I Need Somebody!: wordless wednesday”