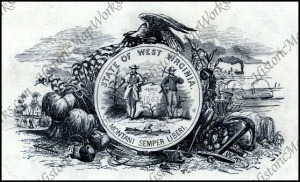 Drawn on thin paper discolored to a light blue, the survey map described a distinct parcel of land with corners marked by Black Oak, Water Beech, Limestones, fence posts, stakes, and Hickories.  Lines connected the corners and were labeled with surveying code–S37 W 151/2 poles and the like.  Unnamed squiggly lines posed as small streams crossing the land, emptying into an unnamed creek boundary. Lines cut the map into pieces; within one rectangle was the name A. Minor, within another the name R. Minor.  The outside bore a cryptic “plot of Virginia land 575.”

Five hundred and seventy-five was the amount of land that John P. Minor purchased from James P. Wilson in 1841 and 1842.  As I reread those deeds I traced my finger along the lines of this map, and with great excitement realized that I did indeed have a map which depicted the Minor land acquisition of 1841 and 1842 in Harrison County, (West) Virginia! 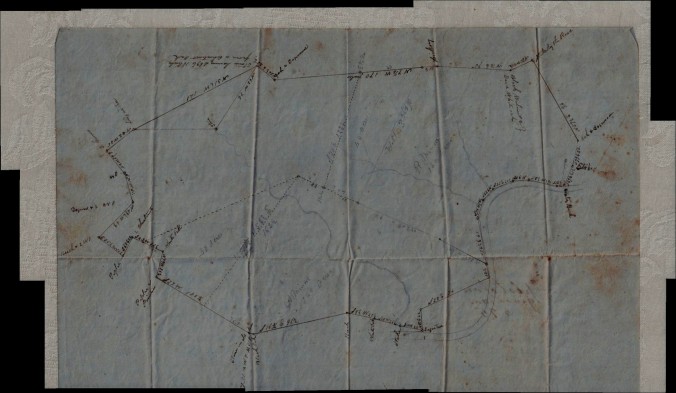 With that confirmed I could with great certainty know that the bigger stream indicated Simpson’s Creek, and the smaller streams were Limestone Run and Stout’s Run.  However, I still didn’t know when this map was created or where this parcel of land was on a current map.

The 1849 document transferring a piece of this property to Abia and Robert Minor was never executed.  It was as if the boys had given John P. some reason to pause before deeding title. BUT the document gives a surveyor’s description of the considered transaction, and that plot is only the piece labeled R. Minor in this map–a clue that this map was created sometime AFTER 1849.  Other documents related to this land include John P. Minor deeding the tract of land labeled here A. Minor to Abia Minor in 1854. Therefore, I conclude that my surveyor’s map was created sometime between the years 1849 and 1854.

The when of the map was closer to being settled at this point, however I was left no closer to understanding where these 575 acres were located. For that I consulted  the Federal Census data hoping to track the residences of the young men.  My hunch was rewarded with an interesting trail.

If Robert was on that land so long then searching for a map of that 1860-1880 era might yield some clues.

At Historic Map Works I did indeed find such a map–An Atlas of West Virginia, published by D. J. Lake and Company in 1886.   This map labeled not just towns and streams, but homes and businesses. I found Robert Minor’s name by a square that sat on a small stream, presumably Stout’s Run, that emptied into Simpson’s Creek north of Bridgeport.  Limestone Run had been renamed Barnet’s Run by 1886.  With these facts I could look at a Google map with new eyes and locate the ‘Plot Virginia Land 575’. 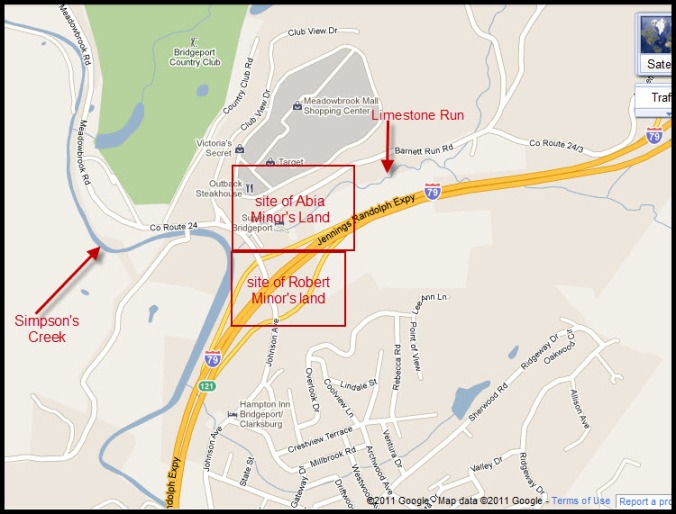 Limestone Run was renamed Barnet's Run by 1886, and the farms were covered by interstate and malls by 1986.

A mystery is solved, and leaves me with mixed emotions.  Now I know where my ancestor once walked; where, finding coal and water and good land for farming, John P. Minor expected to give his sons a great leg up in life.  Now I know that today’s parents walk from store to car, and drive home on streets and highways, on top of that land. They too expect to give their sons and daughters a leg up.

**With sixteen passes of the Flip Pal I had successfully scanned the map before me and stitched it together into a seamless jpeg file with the built in Stitch Tool.  Flip Pal. LOVE. IT.  Check it out here.