WRITE ON!  The Family History Writing Challenge has given me permission to write and write and write, even if only a few dozen words a day.  Last week I had woven research and lore into a story exploring John Pearson Minor’s service record during the War of 1812.  This week I explored the contents of a ledger book found among the Minor Satchel.

Hogs bought by Lot Lantz for the use of the Drove

wherein Lantz and Minor are in Co are as follows:

I fell into the rabbit hole of 1820s, a decade in which John Pearson and Isabella Minor added five children to their brood of three, and John Pearson began to make a name for himself as a livestock drover.  Below those words John P. had recorded transactions, creating a table, detailing the number of hogs purchased from each farmer and the cash paid.

Cash paid stoneing for four stock hogs and left in the drove  7.00

Amount of advancements made by John P Minor taken off

Hmmm…So John Pearson Minor and Lot Lantz were business partners and livestock drovers.  In late autumn in 1826 they gathered up 371 hogs, purchased from 43 neighbors and farmers from  Greene County Pennsylvania, and herded the lot to market in Baltimore. Wait a minute.

How does one HERD 371 hogs to market?

With an image of 371 hogs, grunting and rooting and squealing down a narrow dirt road, I began  my follow up work of the week.

Southwestern Pennsylvania’s culture and economic matrix resembled that found in the Ohio frontier and in the mountains and valleys of the Allegheny- Appalachian Mountains.  In fact, many original settlers  of Greene County  made their way from those Virginia counties, and many families had members who migrated on into the eastern counties of Ohio.  Just as the genealogical branches crisscrossed the region, so too did the business paths. 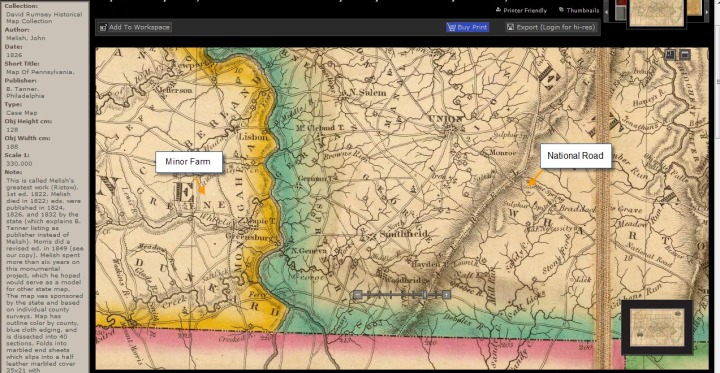 John Pearson Minor took his 371 hogs from Greene Township, Pennsylvania south, to Baltimore, Maryland in late autumn, the customary season for droving.  Looking at John Melish’s 1826 map of Pennsylvania, it is easy to imagine that Minor and Lantz rounded up the animals near Greensburg and proceeded north before crossing the Monongahela and continuing east to Union, Fayette County.  At 8-15 miles a day, the drove would have found itself traveling south on the National Road in about three days.  In all likelihood, Lot Lantz and John P. Minor traveled on horseback and hired “pike boys” to walk beside the hogs, whips in hand;  each set of hands traveled a day or two on down the road before leaving the drove and heading back home, replaced by a new set of boys.  Each night the drovers, drove hands and hogs would stop at a drove stand, run by a local farmer or entrepreneur, where the collection of animals and men would find pens and forage, and food and lodging.  Minor and Lantz were not alone with their swine; at the peak of droving season there was a continuous stream of hogs and cattle sharing the 22 foot road with wagons and coaches traveling both east to Baltimore and west to Ohio.

The month long trip to Baltimore was difficult; weather was a constant concern.  The National Road from Union to Cumberland was built to the high European standards of the day, with a macadam surface that promoted proper drainage and stood up to the constant travel of animals, wagons and coaches.  This pike also had more bridges than other drover routes, making river crossings less hazardous. The trail was at times steep and treacherous. In addition, the drovers had to remain vigilant for signs of lameness, weight loss and illness among their stock.  At Cumberland, John Pearson and Lot Lantz may have put the hogs on a ship and sailed down to Baltimore, or continued along the main road, the Maryland-run pike.  In Baltimore, Minor and Lantz would have sold their “hog on hoof” at a profit, and then headed home, by the same route, collecting lame animals that had been left behind the drove and paying the drove stand owners for services previously rendered.

And that’s how those little piggies got to market!

I am grateful to these online sources: