“Church Record Sunday – describe a specific church record or a set of records held by a church or denomination and how they can assist genealogists. This is an ongoing series developed by Gena Philibert Ortega at Gena’s Genealogy.”

Trolling through the records of Greene County, Pennsylvania, I came across a transcription of the Goshen (John Corbly) Baptist Church minutes, 1773-1857, in which appear the names of several Minor ancestors.

Abia Minor and his wife, Margaret Pearson, became members shortly after bringing their young family to the wilds of southwestern Pennsylvania.

Met at Thomas Wrights and after singing and prayer proceeded to business. When Abia and Margaret Minor were received by a letter of dismission from Highestown, New Jersey.

John Pearson Minor (1791-1874), their eldest son, remained in the vicinity of Big Whiteley Creek and, as noted by local historian, William Hanna, in the 1888 History of Greene County,  was among the prominent members of this congregation, “fervent in spirit” and”diligent in business, being extensively engaged in droving, and one of the active participants in the affairs of the Farmers and Drovers Bank of Waynesburg.”

This religiosity and business acumen would account for the inclusion of this handcut and bound booklet among the documents of the Minor Satchel.

We the undersigned do agree to pay the sum assigned to our names.  To John Long, Corbly Garard, jonathan Garard, JP Minor, Vinson Long, Jeremiah Stewart and Abner Morris.  A building committee for the benevolent purpose of building a meeting-house for the regular baptist church on big Whiteley, called Goshen.  To be built of brick 43 feet by 55 feet, one story 14 feet high.  To be built at or near the place where the old house now stands.  The money subscribed to be paid, one half when the house is covered, and the balance when the house is completed.  For the faithful performance of the above we here unto set our names and sum.  This 12 day of December 1842.

The addendum to this 1843 record states indicates that this brick building was completed by February of 1844:

Settled up all borrowed money and A Minor is to lift a note in the xxxxxxx for $220 and give up to John P. Minor xxxx.  my hand this 19th day of February 1844. 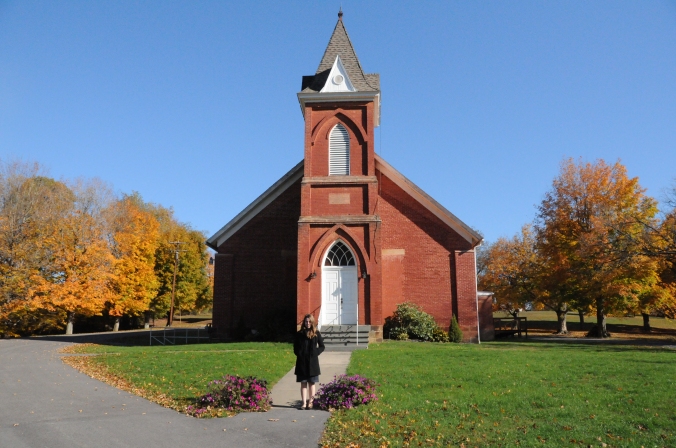