I don’t live anywhere close to where my ancestors grew up. I don’t even live close to where I grew up! When my kids started leaving home, and my parents started leaving this earth, my sense of place and time, home and identity got launched airmail to the moon. Thus was started a genealogical hobby that has turned into a family history passion (that some would call compulsive hoarding and obsessive research.) MY ancestors, MY photographs, MY family, wrapped me in stories. Cocooned by memories I feel rooted, ready…to see more stories.

Suddenly every town I pass through holds the possibility of a tale–not mine, directly, but my husband’s and our children’s.  These mountains and the Susquehanna River are holding the Irish lilt of Corrigans and Dooleys, Monaghans and Carrolls and Delehantys. St. Patrick’s Day seems a fitting day to introduce some of these characters.

Straight off, let me explain that when I write about John Corrigan, I am writing about John Corgan.  And vice versa.  John was an Irishman, born in 1811 in County Carlow, near the town of Leighlin’s Bridge, and just east of the Leinster Coalfield.  When he married a Queens County girl, Mary Dooley, in 1833 was he a miner? Perhaps.  The couple had three children in Leighlinbridge–Martin (1834), Esther (1836) and Margaret (1839)–before they moved to the Welsh mining town of Swansea, where Daniel (1841) and Michael (1843) were born.  The growing family returned to Ireland, where daughter Ann (1845) was born.  But the famine conditions drove John and Mary out of the country, back to Swansea, Wales in search of a better life. Certainly Mary was busy caring for all of these children, and bearing two more–James (1847) and Catharine (1850), while John and Martin worked in the mines for the Swansea Coal Company.

On the plus side, the training inside Welsh mines was considered to be outstanding, and Welsh miners were sought after among American companies in the mid-century anthracite boom.  The Corrigans became Corgans, a Welsh miner’s family.

In December of 1851, John Corgan left his pregnant wife and eight children in Swansea and headed for America. Mr. Corgan boarded a ship in Liverpool, England, and arrived in New York, New York on January 2, 1852.  John Corgan found work in the company town of Nesquehoning, Pennsylvania, home of the Lehigh Coal and Navigation Company.  Word was sent back across the Atlantic, and in September, six weeks after delivering her ninth child, Elizabeth, Mary set off with her family to join John. The brood arrived in New York on December 2, 1852.

Nesquehoning was a company town, with a company store that let families pay “on the cuff”, credit paid with wage deductions.  John Corgan, and his elder boys, worked with the certainty and expertise of the Welsh miners, and were compensated as skilled miners. This family had options, while most miners were held in abject poverty, never clear of their company debt.  The Corgans could move, and move they did.  Family records indicate that the clan lived in several Lehigh Coal Company towns, including Nesquehoning, Summit Hill and Hacklebernie, all near Mauch Chunk, Carbon County, Pennsylvania. In 1855 they moved to work in the newly opened Council Ridge Colliery, operated by Sharpe, Weiss and Company, in what would become the town of Eckley.  The Corgans returned to the Mauch Chunk area of Summit Hill by 1858.  By the end of the decade, John was a naturalized citizen of the United States, and Mary and John were  proud parents of 12 children, the eldest (Martin) being 25 years old and the youngest (William) just a year and half.

By 1860 the entire family had moved up the mountains, to the communities surrounding the growing coal hub of Hazleton, Luzerne County, Pennsylvania.  In addition to celebrating first teeth, an end to diapers, First Communions and Confirmations, the Corgan family planned weddings,and John and Mary welcomed grandchildren into their home.  To play with their youngest kids.  The thrifty couple also purchased land–five lots on Second Street, between Mahoning Road and Tunnel Street, in Mauch Chunk Township (now Jim Thorpe).  Though the family was moving quite frequently–whether for better working conditions, better pay, or at a company’s request–home for John and Mary remained within the steep hills along the Lehigh River, connected to the parish of St. Patrick’s Catholic church in Nesquehoning.  Before any home could be built, however, Mary died, and in 1863 she was laid to rest in the St. Patrick’s Cemetery, her grave marked with this inscription:

In memory of Mary wife of John Corgan, a native of Ireland, Queens County, Parish of Killeshen, who departed this life July 27, 1863, aged 48 years 11 months and 18 days.   May she rest in peace, amen.

Children weep not in sorrow of spirit, but joy my time is here over, I go that good part to inherit, where sorrow and sin is no more.

The 1860s brought Civil War, and mining was a vital industry to the cause.  There are no records of John Corgan, or his sons, being called up for duty.  But the tax records of that era indicate that John remained on the move returning to Hacklebernie, Mauch Chunk Township, by 1864. The Welsh-trained miner earned $1018.00 that year, which earned him the honor of having to pay the IRS. John remained in the Lehigh Coal Company mines to the end of the decade. 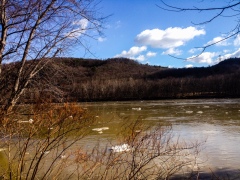 In 1870, John Corgan moved north, into the upper anthracite fields, just off the Susquehanna River, in the steep hills around Moconaqua and Shickshinny, Luzerne County, Pennsylvania.  His eldest daughter, a coal miner’s widow, helped John tend to his three youngest children as she mothered her own two boys.  The sixty year old father kept working as long as he could, until his children were all grown, with adult lives that would be brighter than his own.  John Corgan was an able miner, but illiterate.  He was thrifty and careful to ensure that his children learned to read and write, to have opportunities, to build resilience and self-reliance.  He died at age sixty-six, on March 30, 1877.  His obituary appeared in the Nesquehoning Items of the Mauch Chunk paper:

Died at his residence in East (sic) Nanticoke, Mr. John Corgan, aged 68 (sic) years, formerly a resident of Hackelberney (Hacklebernia).  His remains arrived on the 1:30 train on Monday and was interred in St. Patrick’s Cemetery.  His family consists of six sons and six daughters, all grown up persons, who escorted their father’s remains to the grave.

John Corgan’s life represents a story arc repeated in countless families.  He journeyed from the undulating hills of County Carlow, to the coal ridges of Swansea, Wales; across an ocean to the anthracite fields of the Appalachian Mountains of Northeastern Pennsylvania.  He never saw Leighlin’s Bridge again, or the priest of his parish, the friends from his childhood.  John kept the Welsh spelling of his name throughout his life, a testament to his miner’s education, a pass to a better life for his wife and family. His children’s children lived lives above ground, becoming businessmen, doctors, teachers, clergy, community leaders–a tribute to the grit, determination, and pride of an Irishman.

I am greatly indebted to the genealogists before me, particularly Margaret M. Corgan, author of The Corgan/Corrigan Family, self-published, 1991.  As always, a huge shout out to all archivists responsible for the digital records within Ancestry.com, including the U.S. Federal Census, the US IRS Tax Assessment Lists, and the 1851 Welsh Census.

4 thoughts on “St. Patrick’s Day : Just An Excuse To Work On My Irish Family (in-law) Tree”