My last post contained a LOT of information about the face that greets me when I open the Minor Family Album.  Mr. Chin Whiskers was originally thought to be our family patriarch, John Pearson (Pierson) Minor, but that hypothesis was thrown out when a cousin shared copy of a labeled tintype of John P. Minor.  My image and his image were NOT of the same person.  Continuing my search within the Minor family tree, I compared my image to another image of a known Minor, Samuel Minor, who was John P’s brother.  These two images were not of the same person.  I left the post dangling the idea that perhaps my image is of a third brother, Asa.

Is this bearded man Asa Minor?

Among my family artifacts are documents and letters found in an old leather satchel, retrieved from the Minor Home Farm long ago by my mother.  Included in this treasure trove are letters from Asa Minor to his brother, John P.  (You can read more about this exchange here.) These papers establish that the brothers kept in touch, and presumably John’s children would have known of their uncle.

The 1860 US Federal Mortality Schedule tells us that Asa died in January of that year, succumbing to consumption from which he had suffered for nine months.  His wife continued to live on the farm in Deerfield Township, Warren County, Ohio.

So, Asa kept in touch with John.  Asa was alive in the 1850s when everybody with a bit of money could get a photograph made.

That is all we really know.

I turn to the blogosphere, to photo detectives, to descendants of Asa Minor–what do YOU think?

Of course there are other possibilities…

What if this is a member of Mary Jane Gwynne’s family?  I don’t have much research to document her family, other than her father, Alfred, died in 1835.  And until I can narrow down the timeframe for the photograph, original or copied, then I can’t really narrow down which male family members this might be!!

And so I conclude this post as mystified as I began.  The whiskered man begs to tell a story.  For now, the story will have to remain untold. 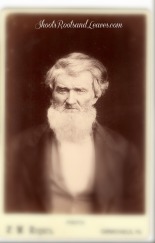 One thought on “The Minor Family Album: Continuing The Search for Mr. Chin Whisker’s Identity”