How good it is to see familiar faces!!

The fifth page frames a young couple’s portrait, carefully staged to tell the story of a momentous autumn day. Robert Minor had just taken May Stevenson’s hand in marriage.

The twenty-three year old groom was dressed in well-tailored pin-striped pants worn with a frock coat and matching waist coat–a fashion which would indicate that the Thursday wedding was held during the day.  His bride, seventeen year old May Stevenson, wore an exquisite gown with lace at the throat, on the bodice, and at the cuffs.  The hat, no doubt designed and made by her milliner mother, Mary Jones Stevenson, was trimmed in the this same lace and finished with feathers.  September 8, 1892 was a grand day for these families.

The Presbyterian minister, T. G. Bristow, conducted the service in Carmichaels, Greene County, Pennsylvania.  After Robert and May exchanged their vows, and the LARGE families of both bride and groom mingled in congratulations, the newlyweds stopped by the Public Square studio of T. W. Rogers and had their picture taken.  Robert stared a bit like a deer caught in a lantern’s light, perhaps rocked by the realization that the circuit of ice cream socials and steamboat shows had come to an end. A soft smile tugged at May’s face, however.  The young lady had survived the arduous years following her father’s death and secured her future with this prosperous young man.  Together the youngsters would join in the family business–raising cattle and children to carry on the Minor legacy on Ceylon Road, Garard’s Fort, Pennsylvania. 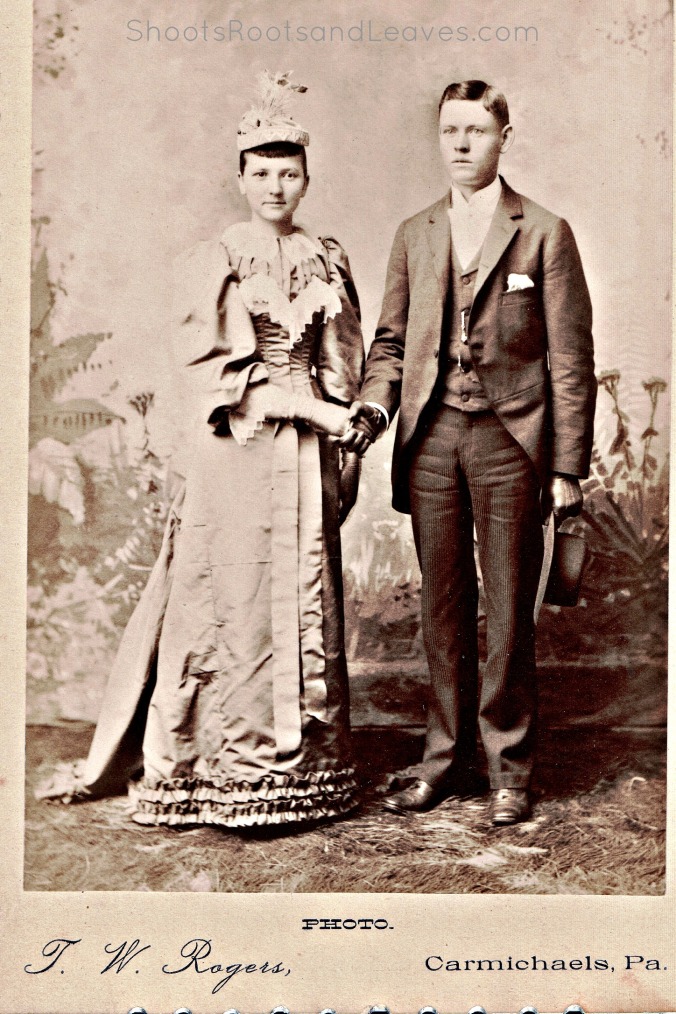 May Laura Stevenson and Robert Minor said “I do” on September 8, 1892, in Carmichaels, Pennsylvania. The service was officiated by Rev. T. J. Briston, a Presbyterian minister.

3 thoughts on “The Story Lies In His Hand”