Observing feathered  behavior is a favorite pasttime, particularly when one individual becomes part of my landscape, part of my family.

My girl’s nest building was furtive, unnoticed. But her alarm routine while I gardened prompted a determined hunt ending at a low growing pine, her nest just above eye level.  Gleefully I imagined the clutch she was protecting, and anticipated the addition of nestling peeps to our spring bird symphony.

I sat at my desk Friday, the clatter of the keyboard drowned out by alarm cries. I was driven to such distraction that I left my desk and walked out on the front porch. At least a dozen robins were participating in a flock alarm pattern, alternately swooping through the air, diving toward the ground or calling from a nearby maple.  Perched at the top of the six foot pine was a Red-tailed Hawk, leering into the shrub’s branches.  At my nest.

I joined the flock alarm, clapping my hands and shouting “HEY!!!”  My herding dog turned his eye on the raptor and added his command.  With great deliberation the hawk looked down, then around, then slowly spread her wings to a lazy lift off.  Atop my neighbors hemlock, twenty-four inches of taloned feathers observed our interspecies team for another minute before abandoning the project all together.

A short while later I held a compact mirror above the nest to glimpse the raptor’s intended prize–four blind, down-covered nestlings.  Several hours passed before I checked one more time on my nest, only to be met by a mother’s stern gaze.  We both have our eye on the future. 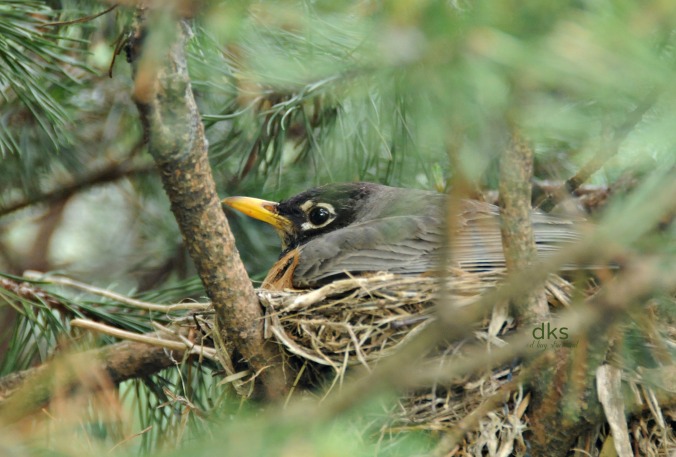 One thought on “Eye To The Future”