In the mid to late 1800s entire branches of original Greene County, Pennsylvania families headed west.  Some may have stopped in Ohio or Missouri before finally heading west again–to the fertile lands of Iowa. Stephensons, Minors, Hartleys, and Keenans swept into the plains of Taylor County, along the south-central border with Missouri.  And many of these western pioneers were related to my great-great-grandfolk, Marion and Mary Jane Minor. The Minor Family Album, then, is more than a photograph storage container; it is the recording of our country’s western migration, and its impact on this extended family.

Page eleven, for instance, tells the story of Jesse Minor (1853-1926) and his wife, Olive Independence Sims (1860-1909).  Jesse grew up next door to Marion and Mary Jane, the son of Marion’s brother, Samuel.  The young farmer left the Minor-studded hills of Ceylon Road when he was just twenty-three, found a wife in Missouri, and settled on land just south of Mormontown (Blockton), Taylor County, Iowa. At the time of this portrait, Jesse and Olive were tightly integrated into the agrarian communities by faith, farming, and family.  Cousin John P. Keenan farmed acres just north of Jesse, and brother John P. Minor lived just to the south.  To the east, just over the Ringgold County line, lived Keenan’s sister, Hannah Hartley, and Minor cousin, John and Mary Stephenson.

Jesse is shown in this photo sitting in the only chair, a Victorian reference to his status as head of household, and his son, Joseph Carl “Jed”, is balanced on his dad’s crossed legs.  Olive sits primly to Jesse’s side, her hands folded in her lap.  Their tween daughter, Della May, stands beside her mother, her hand draped on her father’s chair. The group is well dressed, facing the camera with confident, happy eyes. Fourteen years after leaving southwestern Pennsylvania, little Jesse Minor has firmly established himself as a successful farmer, stock buyer, husband, father, and community member.   This image captured his contentment and pride more completely than any letter’s words, and was saved, ever a reminder that family ties endure, even if Taylor is the new Greene. 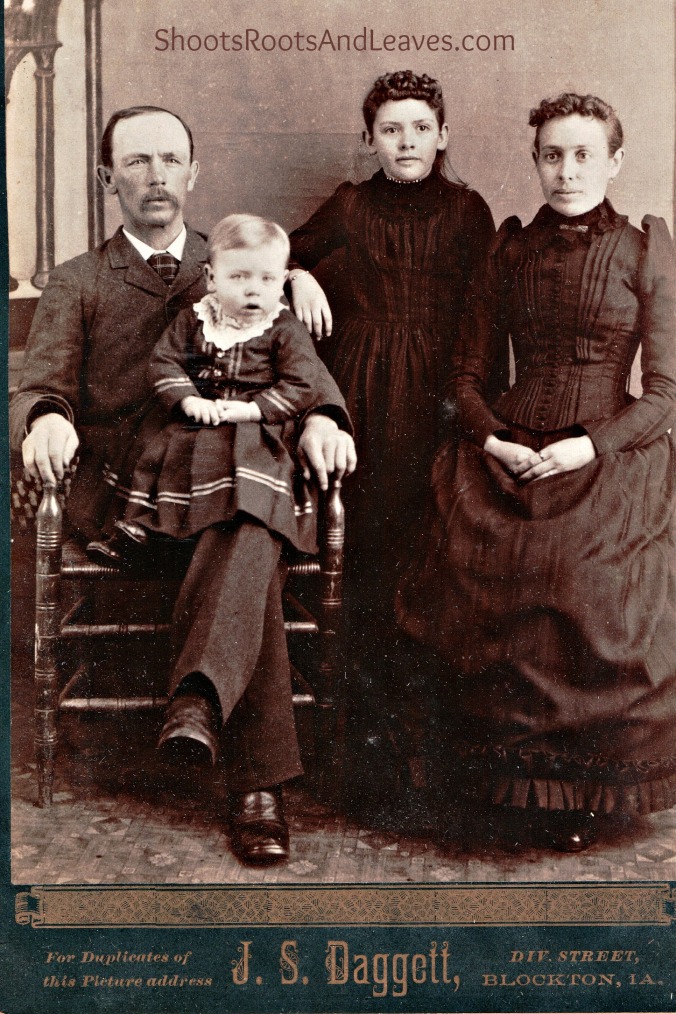 2 thoughts on “Taylor Is The New Greene”