The cabinet card is not quite as sturdy as one would expect from an established photographer like Benjamin E. Goldsberry, and his studio logo was stamped in haste across the bottom, leaving the green-inked words crookedly confirming the man’s location–Court Avenue in Bedford, the county seat of Taylor County, Iowa. Ben Goldsberry operated cameras like an artist and had a strong reputation in the region, training other aspiring photographers like Matthew G. Maxwell. 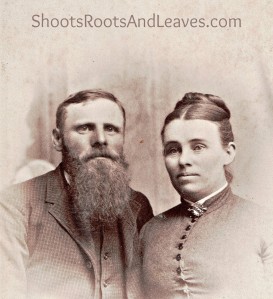 The young couple wear clothes that are simple and traditional, probably made of worsted wool.  The woman’s bodice is plain with no inlays, embroidery or ruffles, and the buttons appear to be made of bone.  She dresses the outfit up with a starched undercollar and a beautiful oval broach at the throat.  Her hair is divided in three pieces; the bottom strands are pulled to the back and twisted into a bun, which is then wound with the two upper pieces for an 1880s finishing touch.  The man wears a jacket and vest made of matching plaid fabric, and a long flowing beard with trimmed sideburns and mustache–a style considered old-fashioned back east.  Mr. Goldsberry operated his Bedford studio from 1880-1890, and these internal clues suggest that the couple posed on Court Avenue between 1884-1889.

I have uncovered six Minor family members living in Iowa’s southcentral counties during the latter decades of the 19th century so far, and only one would fit the description above. 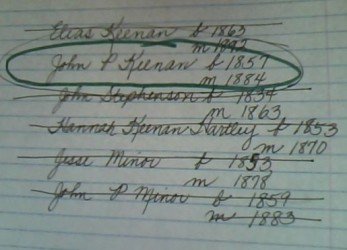 John P. Keenan was born on a farm near Carmichaels, Pennsylvania, son of Hugh and Isabella Minor Keenan. An adventurous person, John left Greene County in 1875, and as an eighteen year old made his way to Taylor County, Iowa, where he herded other people’s cattle for a living.  He was an enterprising man known as a progressive farmer.  By 1881 John was acting as the legal agent for his Uncle Marion Minor, collecting “judgements” from other Greene County residents who had borrowed money to establish their Iowa roots.  During this same time period, John had made enough money to purchase his own farm in the neighboring Ringgold County. There he met, courted and married Minnie Norton in 1884.

By 1887 John and Minnie had the opportunity to purchase 300 acres of fine farming land south of Mormontown (Blockton), Jefferson Township, Taylor County.  Their lives were turned topsy-turvy when son Hugh was born the summer of 1887.  Unfortunately the following year was filled with grief, as they lost first Minnie’s father, Martin, and then their little boy.

Perhaps later that fall the young farmers headed to town, purchasing winter supplies, tying up financial matters, posting letters before the winter storms set in,  and stopping by Court Avenue to document their resilience for posterity. 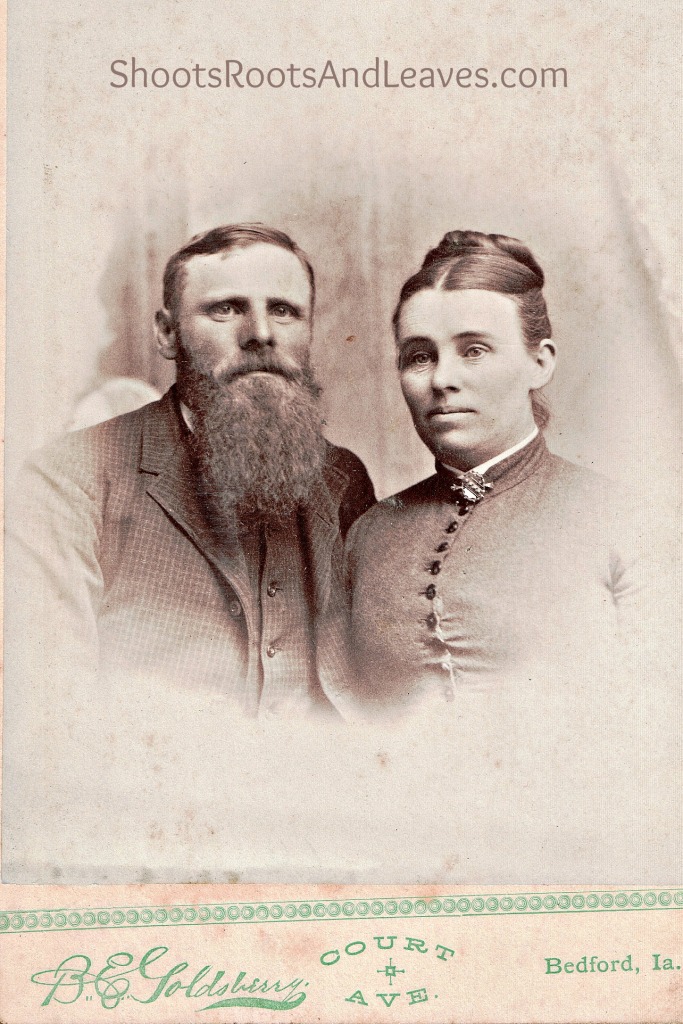 2 thoughts on “On Court Avenue”