My last post contained a LOT of information about the face that greets me when I open the Minor Family Album.  Mr. Chin Whiskers was originally thought to be our family patriarch, John Pearson (Pierson) Minor, but that hypothesis was thrown out when a cousin shared copy of a labeled tintype of John P. Minor.  My image and his image were NOT of the same person.  Continuing my search within the Minor family tree, I compared my image to another image of a known Minor, Samuel Minor, who was John P’s brother.  These two images were not of the same person.  I left the post dangling the idea that perhaps my image is of a third brother, Asa.

Is this bearded man Asa Minor?

Among my family artifacts are documents and letters found in an old leather satchel, retrieved from the Minor Home Farm long ago by my mother.  Included in this treasure trove are letters from Asa Minor to his brother, John P.  (You can read more about this exchange here.) These papers establish that the brothers kept in touch, and presumably John’s children would have known of their uncle.

The 1860 US Federal Mortality Schedule tells us that Asa died in January of that year, succumbing to consumption from which he had suffered for nine months.  His wife continued to live on the farm in Deerfield Township, Warren County, Ohio.

So, Asa kept in touch with John.  Asa was alive in the 1850s when everybody with a bit of money could get a photograph made.

That is all we really know.

I turn to the blogosphere, to photo detectives, to descendants of Asa Minor–what do YOU think?

Of course there are other possibilities…

What if this is a member of Mary Jane Gwynne’s family?  I don’t have much research to document her family, other than her father, Alfred, died in 1835.  And until I can narrow down the timeframe for the photograph, original or copied, then I can’t really narrow down which male family members this might be!!

And so I conclude this post as mystified as I began.  The whiskered man begs to tell a story.  For now, the story will have to remain untold.

When I first became curator of the Minor Family Album, I moved swiftly to identify this man, the first face to appear in the album. I was soooo certain of my clues and my analysis.

Digging into the family’s tree, I determined that the one Minor living near Carmichaels, Pennsylvania in the early 1870s old enough to present this image was none other than our patriarch, John Pearson (Pierson) Minor, 1791-1874.  I proudly announced my conclusion to the world in this blog.*

Time has passed, my skill set has expanded, newly discovered cousins have shared their treasures, and I have eaten a very, VERY large piece of humble pie.  In other words, I MUST retract my earlier identification.

This photograph is a paper print on a 4½ x 6½ inch ivory colored cardstock, with rounded corners.  The photographer’s name and studio location–Thomas W. Rogers, Carmichaels, Pennsylvania–appear only at the bottom of the photo.  There is no design or notation on the back.  This portrait is an example of a cabinet card, most like created between 1869-1875.

Next I view the print with an eye for internal clues.  The man is seated in front of a dark backdrop.  White dots indicate that this photograph may be a photo of a photo–that the original photograph was on a surface like glass or tin, and that the photo’s chemicals flecked off with time.  In the upper left hand corner there appears to be a curvature of the backdrop, as if the original photograph was in an oval shape. 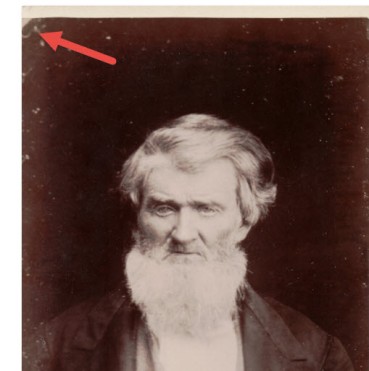 The man is sporting a full beard, trimmed tight about his ears and mouth.  Beards were not popular until the mid-late 1850s, and were worn by a generation of men until the late 1800s.  The man has a full head of gray hair, worn long over his ears, and parted on the side.  It does not appear to be greased down.

The shot captures the fellow from the chest up, and his beard hides the neckline.  But the coat appears to be loose fitting, with a fairly wide lapel.  The vest is of a different material and the top button is at the height of the coat’s top button, mid-chest.

These internal clues indicate a timeframe between the late 1850s and the late 1860s.

The man himself appears to be between 55 and 70 years old. And sick.

Back to the stories, the roots, shoots, and leaves of this Minor Family tree.  And let’s just suppose that I am looking for a male family member who would have been between 55-70 years of age in the late 1850s to the mid 1860s.

So, patriarch Abia was dead by 1834. Francis Marion and his brothers would have been too young to be the photographed dude. That leaves a closer examination of John P., Samuel, and Asa, all of whom would have been alive in the late 1850s and at least 60 years old.

Cousin Ron Minor has generously shared a digital image, a photograph of a tintype, which was annotated with identification.

The man  identified as John P. Minor (shown here on the left) has a higher forehead, and a thinner face.  The eyebrows are not the same shape, and the hair appears to be thinner.  Mr. Chin Whiskers is not John P. Minor.

A photograph of Samuel Minor found on the website Ancestry.com bears a strong resemblance to John P., a high forehead, with gray hair thinning at the brow. Samuel’s eyes are deeper set than those of my Mr. Chin Whiskers.

*I have since removed that original post because of the improper identification, AND because people were taking the misidentified photograph and posting to ancestry.com without my permission.  If you see something that you would like to share, please ask me about it. 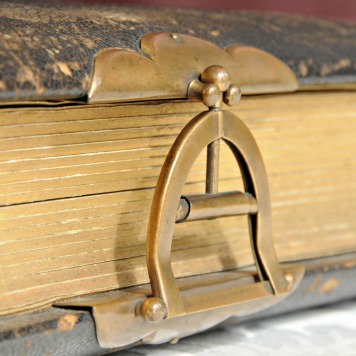 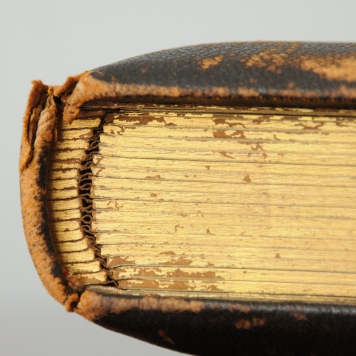 The tooled leather volume resembles a family bible, ornamented by the addition of a bronze latch. The heavy cardstock pages are cut out in the middle allowing for two cabinet cards to be displayed, back to back.  A thick gold line frames each photograph.  Buckled into the Minor Album are twenty-eight portraits taken between 1860-1900.

JUST WHAT DO I HAVE HERE?

THIS is the title page.  Gorgeous!!  Right?

Let’s start with the known.  The album was recovered by my mother from the attic of the farmhouse in which she grew up.  In which her father grew up. In which her grandfather and his father grew up.  From the attic of the Minor Home Farm on Ceylon Lane, purchased by John Pearson Minor circa 1830.  Just who, then, might have purchased the album and slipped the cabinet cards into place?

Women of the Victorian era were associated with the collection of family memorabilia and its display; photograph albums were part of this creative work.  Mary Jane was the woman of Ceylon Lane, the mom of the Minor Home Farm, during the period that this album was filled.

This hypothesis has been strengthened by my work comparing other labeled photographs in my collection  with those that I am finding inside the album.  I have identified several images as members of the Mary Jane and Francis Marion Minor Family.

My sleuthing adventures begin with this hypothesis–the cabinet cards of the Minor Family Album belonged to Mary Jane and Marion Minor, and represent members of their immediate and extended family.