On May 28, 2016 I drove through the rolling landscape of north central Pennsylvania to the New York border.  I drifted west over winding backroads until I hit the outskirts of an ancestral home.  Along the banks of Cryder Creek, Whitesville contains the memories of pioneering people, including the White and Teater families, from which I am descended.

In the late 1810s, Samuel followed his father-in-law, John Teater, to the farmland that became Independence Township, Allegany County.  His wife, Nancy, was a teacher and helpmate to every endeavor that Samuel undertook, which included the raising of seven children and the building of a hamlet’s first hotel in 1827.  Samuel was a farmer, cattle dealer, a shop keeper, an innkeeper; he served his community as town clerk, postmaster, and town supervisor. With time the hamlet took on the name Whitesville.

Folks of Independence Township had long believed the oral tradition of how their town got its name.  Roger Easton, Independence historian, led the effort to formally attribute the village’s name to Samuel White’s life and legacy.  That last Saturday in May several descendants gathered at Lot 50, site of the White Hotel, and unveiled the Legends and Lore highway marker.

Thank you so much, Roger and all the supporters of the Independence Historical Society for your dedicated efforts (and for lunch)!!

In the Sabbath Recorder, a newspaper of the Seventh Day Baptist Church, the following obituary appeared on September 20, 1860:

WHITE — At the Utica State Asylum, Sept. 4th, 1860, Samuel S. White, of Independence, Allegany County, aged 64 years.  Mr. White had been suffering from a partial, and at times, a total mental alienation, since about the 9th of October of last year.  In the fore part of November, he was removed to the Asylum, where his last days were spent.  After he became an inmate there, his physical health seemed to improve, and with it, his mental; especially was this the case during the past spring.  But, in the fore part of August, pulmonary consumption set in, and terminated in his death within a month.  Mr. White settled in early life, forty-two years ago last April, in the the town of Independence, earnestly and successfully devoted himself to business, and was prospered beyond the lot of most men.

By the 1850s, mental alienation was considered a disease of the brain that was treatable.  Its causes and cures were rooted in environmental factors found in food or water  and social issues like a stressful work environment.  The New York State Asylum at Utica was the institutional home of the American Journal of Insanity, and through its Superintendent, Dr. John Gray, at the forefront in the treatment of mental illness. It was held that insanity was curable, but that the patient had to be totally isolated from family and the stresses of society.  An orderly, controlled environment of light work, recreation and rest was essential to the cure. In instances in which a patient was at risk of harming him/herself or others, restraints were used.  One such device was the “crib”, a box shaped bed with a cover of slats,  which was securely locked while the patient was inside.

Samuel White was ill in October 1859.  However his mental instability manifested itself, his wife, Nancy Teater White, and children must have been gravely concerned, seeking the counsel of their local physician.  The decision to continue treatment at Utica was probably one of hope, with an expectation that this community leader would return home, cured of his mental alienation. Samuel was seen by Dr. Gray, diagnosed as insane and admitted to the men’s ward of the great Greek Revival building in early November 1859.

What treatments did Samuel require that winter?  Was he permitted to socialize among the other 300 patients; or was he contained in a “crib?”  And at the end, as he lay dying of pulmonary consumption or tuberculosis, did Dr. Gray break the rule forbidding contact with family, and allow Nancy and his children to visit, to comfort him as he passed over?

“and he was prospered beyond the lot of most men.” 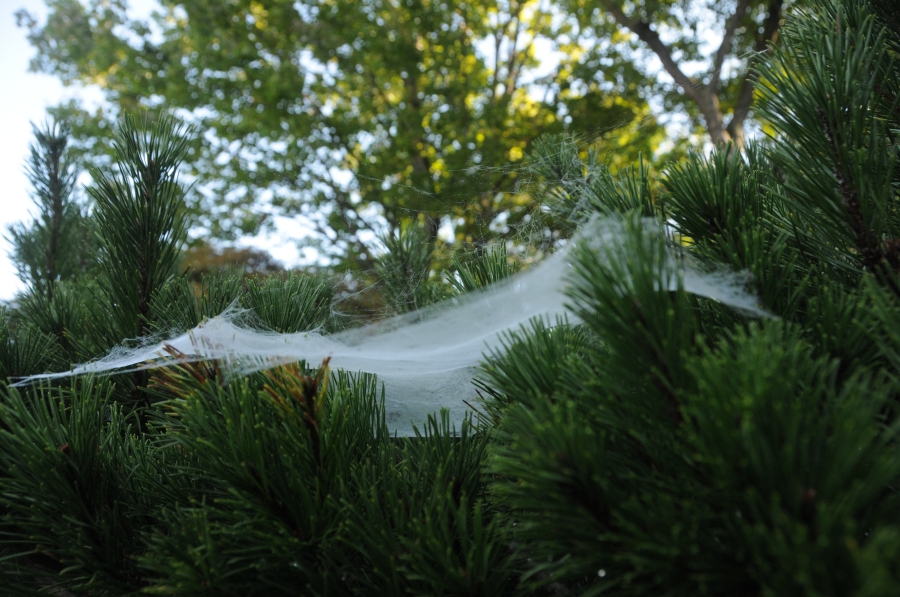 This is my brain on genealogy.

While transcribing a letter dated July 24, 1869, a couple of its sentences looped relentlessly through my head, like a snippet of a catchy tune. My great-great-grandfather complained to his brother, James :

My year’s expenses devoured my year’s salary (as principal of Rushford Academy), and left me as poor today as one year ago today.  Serena does not dispose of much of her landed property, though, of course.

Just how much landed property did Serena have? De Beer’s 1869 Atlas of Allegany County, New York mapped residences, illustrating that the couple, or rather, Serena owned three properties – the Gothic house on Alfred University’s campus, a farm a few miles south in Independence, and a house on Main Street, catercorner to Rushford Academy.  How did Serena come by these properties?  On her teacher’s salary?  Hardly likely, since Ira notes that his wages didn’t cover expenses. Mutter, mutter….. Far more likely that Serena received land and property from her parents, Samuel S. and Nancy Teater White, who had been successful farmers and business owners in Whitesville, Allegany County. But how had they managed that in one generation, on those rocky Appalachian hills, removed from any highways or railroads?  And what attracted them to western New York in the first place?

In the space of five minutes I found myself in a web of my own, sticky design.

This is my brain on genealogy, just a web of ideas and places and people, stuck together in a mass of interconnected strands.  Not til I imagine that I am a Super Fly, using this mess as a trampoline, can I make a bounding leap of faith and see the story hidden in its design.

The Whites of Whitesville came from the sea

Samuel’s father was born Oliver White, Junior, in 1759 to Oliver White and Mary Sherman in the town of Newport, Rhode Island, down by the sea. Oliver Jr. removed west to Hopkinton, Rhode Island, a small town carved from Westerly, by 1775 when he first enlisted in the colonies’ army. Oliver served off and on for the duration of the Revolution, and between one of his tours of duty, on March 1, 1781, Oliver made a fateful decision. He decided to marry a Seventh Day Baptist.  Cynthia Burdick was the daughter of  Hannah Hall and Robert (4)  Burdick, who was the latest generation of Burdicks to provide leadership to the Westerly congregation.  Like other Baptists, they believed that local congregations were autonomous from a church hierarchy and had the authority to make decisions locally; and that the Bible was the authoritative source of faith. But unlike other Baptists, the Burdick family held that the scriptures designated Saturday as the Sabbath.  Sabbatarians worked on Sunday.  The rhythm of their work and worship, then, fundamentally differed from those of the larger community – and economy – in which they found themselves.   (Oliver Jr. became a member of the Hopkinton Seventh Day Baptist Church in 1786.)

As the atmosphere became more hostile to those not adhering to the conventional Christian sabbath, the sabbatarians began to migrate westward.  They moved in clusters, establishing communities in which they were free to work six days and worship on Saturday.  Oliver and Cynthia left Hopkinton, RI, with their children including Samuel, before 1810.  They lived for a short while in the 7th Day Baptist community of Brookfield, Madison County, New York, before moving on to Alfred, another center of sabbatarians, before 1816.  Here, young Samuel met and fell in love with a young school teacher and early organizer of Alfred’s Seventh Day Baptist Church, Nancy Teater.

They married in 1819 and moved to a new community south of Alfred, near the millson Cryders Creek. Within their first decade, Nancy and Samuel had established a farm, started a family, provided leadership for another Seventh Day Baptist congregation, and opened a hotel in the town which soon bore their name – Whitesville. 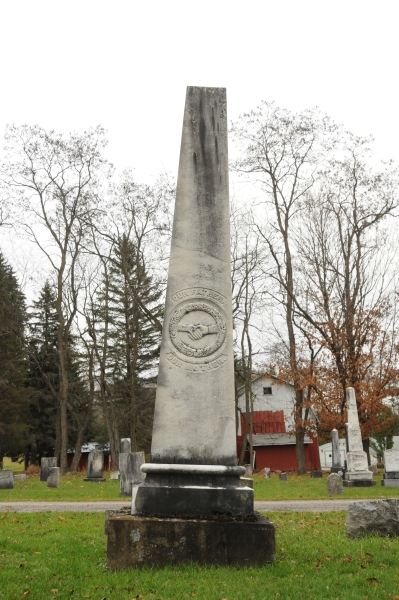 Not long ago I took a genealogy field trip from my home in northeastern Pennsylvania to Allegany County, New York, following the Appalachian ridges to the hills of my ancestors, great-great-grands Ira and Serena White Sayles.  A wonderful thing happened on the way back south – I found Serena’s hometown, Whitesville.

What I Found Between the Hills

In a preparatory internet session I had found an index for the Whitesville Rural Cemetery, which had not included my third great-grandparents, Samuel S. and Nancy Teater White, Serena’s parents and founders of this hamlet.  So on my way into town, I just drove by the gates of the meticulously maintained grounds.  At the other end of Main Street I parked and snapped a photograph of the beautiful town signage, returned to the car and promptly went right back down Main Street the way I had just come.  Why?  A nudging from the past?

I drove into the cemetery, about thirty yards, and parked.  The tombstones were old here, lichen and moss gently adorning the rock, and my sense was that I had reached the burial grounds of my ancestors.  I stepped out of my car again, camera slung over my shoulder, and pointed it at a neutral object to get a light meter read on the gray, overcast fall day.  Turning, I approached a magnificent stone:

I found my peeps!

Or maybe, they found me.