“Regular maps have few surprises: their contour lines reveal where the Andes are, and are reasonably clear. More precious, though, are the unpublished maps we make ourselves, of our city, our place, our daily world, our life; those maps of our private world we use every day; here I was happy, in that place I left my coat behind after a party, that is where I met my love; I cried there once, I was heartsore; but felt better round the corner once I saw the hills of Fife across the Forth, things of that sort, our personal memories, that make the private tapestry of our lives.”
― Alexander McCall Smith, Love Over Scotland

My Sayles ancestors did not leave a trace of their personal maps; only clues left in letter heads or the handwriting of a census enumerator reveal the location of family at a given point in time.  It is left to my imagination to draw smiles, hear wails, to listen for laughter or argument.  I found this map of Wallum Pond, Rhode Island while searching for brain-twizzling information on the King family. *  The book chronicled the history of a 20th century sanatorium and included the early landowners of the area.  Identified in the map’s key was the location of the James King farm, at points 16 and 17, at the southern  tip of Wallum Pond. 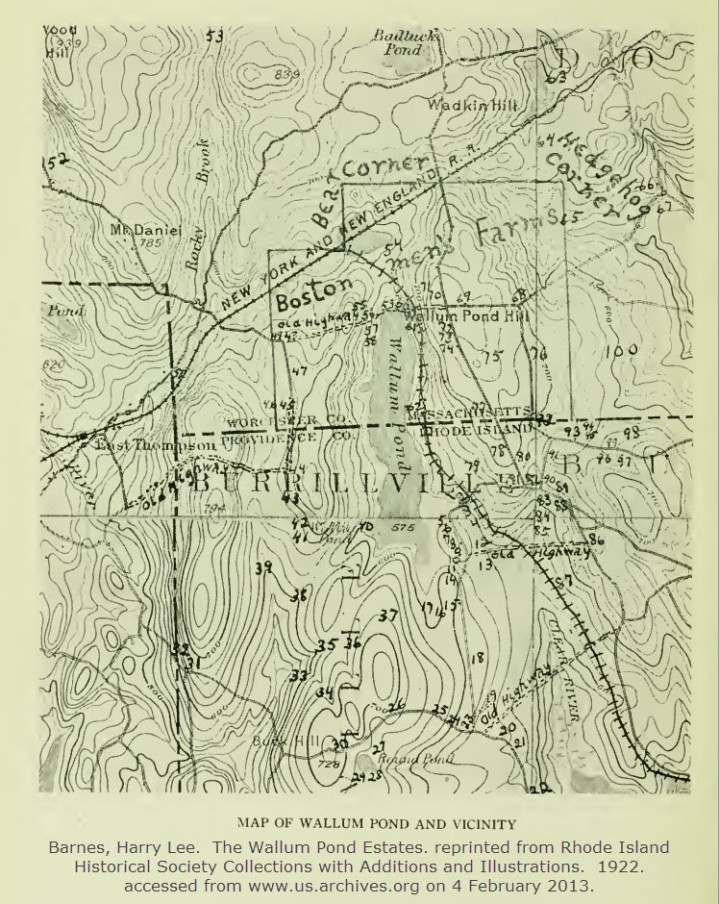 I can read all sorts of information from these squiggles – the lay of the land influenced the establishment of waterways, transportation networks, farms, mills, communities.  My imagination has to supply the “at the top of this hill James and Rhobe discussed what road to take west,” or “here is where Sarah cried after learning that her parents were moving to Pennsylvania.”  This map marks the spot where James King learned to farm from his father, James, during the late 1790s.  It marks the spot  where James and Rhobe reared a family and raised their stock, drained the bog and grew their corn, and where they packed their belongings and loaded up the youngest members of their brood as they headed out to the wilderness of Tioga County, Pennsylvania in 1822.

I have to supply the imagination that weaves the tapestry of their life.

*Ira Sayles is my great-great-grandfather on my father’s side, and the impetus to my participation in the Family History Writing Challenge, February 2013.  His father, Christopher Sayles, was the son of Burrillville, Rhode Island residents, Christopher and Martha Brown Sayles; Ira’s mother, Sarah, was  the daughter of James and Merrobe Howland King of Wallum Pond, Rhode Island.

I have sworn to produce more and consume less in 2013; write more, research less;  read more books and fewer status updates.  I have stumbled a bit in the last week, as I prepared for the Family History Writing Challenge.

Determined to set a rich social context for my protaganist, Ira Sayles, I returned to accumulated notes hoping to glean early childhood vignettes.  A self-defeating  act, as it turns out, since I spent an ENTIRE day surfing the ‘net for collaborating evidence of the family register and family trees. By nightfall I felt like a zettabyte of information was smothering my writing spark.  Yes, I found genealogical gems, that appear to be well-documented and thoughtfully written.  And yes, they offer conflicting information.

DID IRA DESCEND FROM ARTHUR, JOHN OR HENRY HOWLAND?

Previous genealogists have gathered quite a bit on this dilemma, as it turns out. I have enough family documentation, indirect and direct primary as well as secondary sources, to rest assured that Ira Sayles was the son of Christopher Sayles and Sarah King Sayles.  Sarah King was the daughter of James King and Merrobe (Rhobe) Howland King.  Rhobe Howland was the daughter of John Howland, Jr. and Lois Eddy Howland.  Now I pause, not quite certain of my sources in tracing lineage back further, not an uncommon dilemma for folks with Revolutionary Era ancestors. I feel fortunate to document this much of the family, for I can say with a fair degree of certainty that the Howlands farmed land that they had purchased in Scituate, Providence County, Rhode Island, where they were free to worship as Quakers.

But there is a tug on my line that threatens to reel me back further, for you see, the Howlands came over on the Pilgrims’ boats.  Intriguing, no?

John Howland was an indentured servant on the Mayflower, and signed the Mayflower Compact.  Henry and Arthur, brothers of John, came over between 1623-1630.  All of the Howland boys were successful farmers and landowners in the early Massachusetts colony, but Henry and Arthur were obstinate troublemakers, from the Pilgrims’ point of view.  Henry and Arthur broke the Sabbath, refused to worship in public, and *gasp* harbored Quaker meetings in their homes.  Finally the two brothers migrated toward Roger William’s colony – Rhode Island. Settling in communities along the southwestern coast of Massachusetts, the Quaker Howland descendants continued to flourish, and in time migrated on into the western and northwestern corner of Rhode Island.

And that is where I find my Ira’s great-grandfolks.  Quaker Rhode Islanders.  That fact serves as a clue pointing to descent from either Arthur or Henry, not John as a 19th century Tioga County, Pennsylvania history purported.  Yesterday’s search uncovered a source, The John Howland Who Married Freelove Wood,  by Frances G. Jenkins, Williamstown, Massachusetts; this well-documented paper gives evidence that John Sr. who married Freelove Wood was a descendant of troublemaker Arthur.

Now I am really intrigued to read the substantial record of Arthur’s life.  BUT I have yet to determine with certainty the John Jr. who married Lois Eddy is the son of John Sr. who married Freelove Wood.

I turn to you, fellow Keepers of the Family Lore.

Someday my family history writing will be someone else’s old family history.  I would like them to consider it a reliable story, more gospel than clue.